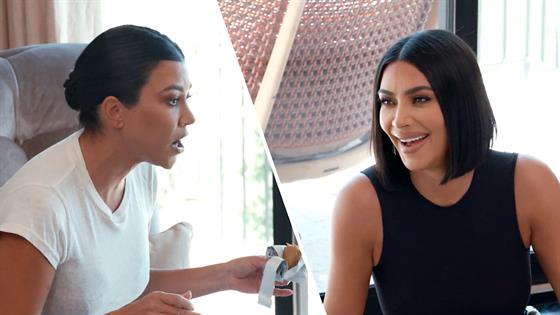 More than a sisterly spat.

In this clip from Thursday’s season 18 premiere of Keeping Up With the Kardashians, Kim Kardashian faces Kourtney Kardashian and Kendall Jenner‘s wrath after she questions their work ethic. The drama starts as the Kardashian-Jenner sisters discuss Kylie Jenner‘s inability to walk in a fashion show due to sickness.

“If I were on my death bed, I would still show up,” Kim remarks.

As Kim suggests that momager Kris Jenner is so used to that commitment from herself and Khloe Kardashian, she inadvertently insults Kourtney and Kendall. After the KKW Beauty boss brings up Kendall’s anxiety, the supermodel warns her sister that she’ll “come at you right now.”

“I was just expressing that, Kylie not going to Paris and how my mom’s freaking out and crying and begging us, she’s so used to me and Khloe showing up, especially Khloe,” Kim defended later on. “Like, we would’ve gone no matter how sick we are, that’s just who we are.”

Understandably, this notion doesn’t sit right with Kendall, who defends that she’s “been sick as f–k,” faced “major panic attacks” and still gone to work.

At this point Kourtney weighs in on the drama, especially once Kim implies the oldest Kardashian doesn’t “care about stuff.”

In a confessional with the KUWTK cameras, Kourtney expresses being frustrated by the constant negativity surrounding her work ethic.

“But also, if I didn’t want to work my ass off and I wanted to be a stay-at-home mom, that’s f–king fine!” Kourtney further explodes at Kim.

Watch the tense scene play out in the clip above.

Keeping Up With the Kardashians returns this Thursday at 8 p.m., only on E!