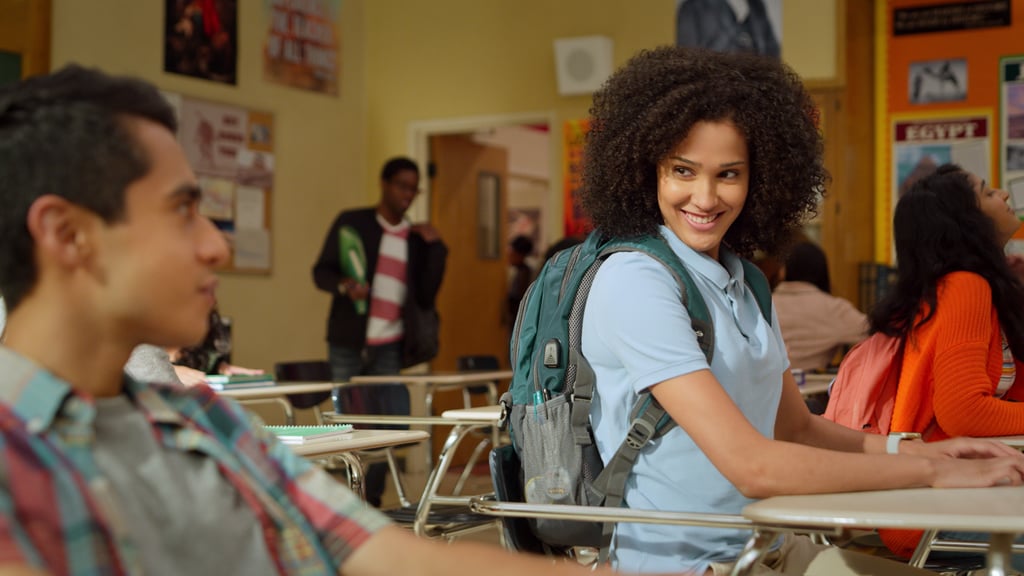 No, you don’t have to be a teen to love watching TV shows (or movies) about high school. Years after getting my diploma, teen dramas and comedies are still one of my favorite TV genres. Lucky for me, they’re all over Netflix. Whether you’re looking for a boost of nostalgia (like Gilmore Girls) or you’re hoping to catch up on a show that’s still on, there are tons of great high-school-centric series you can watch right now. Take a look to get our recommendations!

Looking for even more Netflix recs? Check out the new movies and TV shows that are available on Netflix in June here.

“Stuck in My Head” is a new essay series that celebrates the highly specific moments in fashion history that we’re pretty sure will stay lodged in our brains forever, from film costumes to runway bloopers to the ad campaigns of our youths. Here, Senior Digital Editor Maxine Wally looks back on the St. John spreads that dominated magazines during her pre-teen years.

I first noticed the knitwear brand St. John’s sole model, Kelly Gray, in 2001. I was 11, entering 7th grade, and fully obsessed with fashion magazines. Lying on the floor of my parents’ living room next to a basket filled with old issues of W, In Style, Vogue, and Harper’s Bazaar, I’d flip through pages from the books—which were thick and substantial at that time, heavy as a bible for the September and March editions. I tore out advertisements I liked. I stared at the doe eyes of the supermodels of the moment and memorized their names with the fervor of someone who might be quizzed on them later.

There was Natalia Vodianova, Liya Kebede, (one of few famous black models from the early Aughts—she was the sole woman of color on the cover of Vogue’s September 2004 “biggest issue ever”), Gemma Ward (whose face inspired agencies around the world to sign young women with a similarly otherworldly look), Daria Werbowy (Canadian!), and Gisele Bündchen. They were instantly recognizable, more famous than some of the most well-known celebrities of the year—at least, in the fashion world. And I aimed to know them all.

And then there were the St. John advertisements.

In any given magazine, the brand would buy out six or eight ad pages at a time, each one featuring the same face in every photograph. Gray was a glamorous woman wearing fashions that looked strikingly different from most of the wares St. John actually made—twinsets and cashmere sweater-jackets worn by WASP-y socialites and politicians (Hillary Clinton famously wore a Chanel-esque St. John knit sweater in black with white piping in 1995). Gray appeared in shimmery eveningwear, luxe furs, pantsuits with no shirt and no bra. In almost every image, she was flanked by four or five men at a time. They were, at times, shirtless (one particularly memorable shot featured a man in a speedo, standing far in the background); in other instances, they wore traditional tuxedos and sunglasses while they opened the door to her limo; or they were in all-white suits and matching cowboy hats. Sometimes, the guys were dressed according to theme: in an ad that was supposed to evoke a Scottish garden, they wore kilts. And in a truly iconic photograph, Gray is seen on the upper deck of a yacht, straddling a young blond man in tiny swim trunks.

But the men, however prominently featured, were never the focal point of the pictures. They were attractive, but dully so, and they were, like the supermodels of the era, relatively homogenous. In a time when so many different people who looked eerily similar were being cast for fashion photo shoots, Gray emerged, in my eyes, as an outlier. The explicit power dynamics between the sexes were clear here: there was one woman who ruled them all.

It was Gray, on her hands and knees on the beach; on the back of a motorcycle; riding a futuristic-looking ATV in the middle of the desert; kissing a giraffe; holding onto a baby tiger. This was aspirational imagery on steroids—but for some reason, among pages and pages of glamorous-looking stuff, the world St. John aimed to create seemed to me like it was inauthentic, totally staged, but somehow greatly intriguing. (Maybe I, a kid on the brink of teenage-hood, living in Oakland, California, just wasn’t their target market.) The single mysterious woman at the center of it all, appearing again and again, piqued my interest more than any of the scenarios in which she rode ATVs and straddled half-naked men.

I didn’t know her name at the time, but I thought to myself, who the hell is this woman? She was noticeably different from the supers of the 2000s. She looked more like a catalogue model from the ‘90s, and I mean that with no shade. It’s just that, during this time, a model’s look was altogether unvaried: super-tall, super-thin (and I mean thin), with vaguely Eastern European or Spanish faces. One or two women of color here and there if you were lucky; absolutely no Asian or Pacific Islander models to speak of.

Kelly Gray had a platinum blonde “Can I speak to the manager” haircut, was visibly short, and, although she was definitely thin, she wasn’t a total rail like the others. She was the closest thing to a regula degula woman in those pages. I later found out (and by later, I mean while doing research for this essay,) that Kelly Gray was the daughter of St. John’s founders Robert and Marie Gray. She first started modeling for the brand at 15, and by the age of 30, she was CEO.

In 2005, St. John brought in a new chief executive, who pivoted advertising strategy to bring in Angelina Jolie as their next model. (Gray’s final shoot was with the photographer Peter Lindbergh.) This move reflected a larger moment within the fashion industry, with models were featured less and less on covers as celebrities (in the hopes that they would sell more magazines) took their place.

I think about those curious St. John ads, which aimed to show a life of luxury and jet-setting but instead just read strange, all the time. And I can’t remember the last moment I’ve stopped to think, “Remember that one iconic campaign with Daria Werbowy?”

Related: The Most Surprising Runway Models at Fashion Week Fall 2020