Diana Gabaldon published her first Outlander novel in 1991, which follows a 20th century woman who falls through time and in love with an 18th century Jacobite. The book series has now expanded to a total of eight instalments with a final two still in the making. Readers across the world have been enthralled by the novels, leading US network Starz to turn it into a TV show in 2014.

Model-turned-actress Caitriona Balfe was cast to play heroine and narrator Claire Fraser after a long search for the right person to take on the role.

While Sam Heughan – who was a rising star at the time – was quickly brought on board to portray the dashing Jamie Fraser.

Both Balfe and Heughan have proved popular with both book readers and those watching the show.

However, how much resemblance does star Heughan have to his characters in the source material? 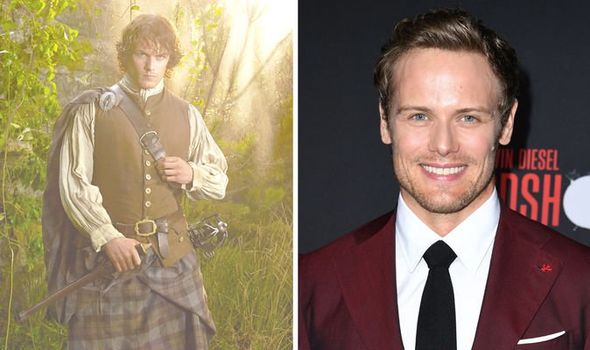 In the novels, Jamie is described as a towering giant with red hair.

Perhaps most obviously, actor Heughan is blonde and doesn’t have Jamie’s flaming locks.

Heughan has previously worn wigs and dyed his hair to look like Jamie.

“Any time you meet fans, they’re so genuinely enthusiastic and supportive.”

He revealed he also managed to go incognito when he didn’t have Jamie’s hair.

Speaking on the Outcasts: An unofficial Outlander podcast recently, author Gabaldon was asked whether the performance of the actors in the show influenced how she wrote the books.

Host and Outlander actor Tim Downie asked the author: “When you’re writing now, like you say you can see Jamie and Bree, does that now influence your later works? When you write Jamie Fraser, do you see Sam?”

The acclaimed writer made a surprising admission, saying: “No, luckily not. No, I don’t.

“I mean there’s a certainly similarity in the general outline, physically speaking but not face-wise. Their faces are quite different.”

She continued: “That’s why my husband likes the show. Whenever he sees Sam in profile, he wants to grab his nose and pull it out another inch or so.

“The real Jamie has my husband’s nose, which is quite long and very straight.

“It’s not a very elegant nose but it is noticeably longer than Sam’s.”

Gabaldon has previously said Jamie is very much based on her husband Doug Watkins, saying at a Random House event in 2016: “Well, I have been married to a tall redhead with a sense of humor [sic] for almost 45 years.”

She also revealed how the physicality between her husband and Jamie was not lost on Watkins.

Gabaldon said at an event hosted by the National Writers Series in Traverse City in 2014 how Watkins had told her: “Based on page 43, the whole world knows what I look like without clothes on!”

She added: “Physically, he does look a lot like my husband.”