A coronavirus mass-screening test described as a ‘game-changer’ in the fight against the disease could be really in a few weeks.

Biotech company Oxford Nanopore is working on a portable swab-recording device called LamPORE, which can determine whether a user has coronavirus in the space of an hour.

As well as being able to process around 30,000 samples a day, the device can also be used to determine whether hard surfaces in schools, hospitals and care homes have traces of COVID-19. 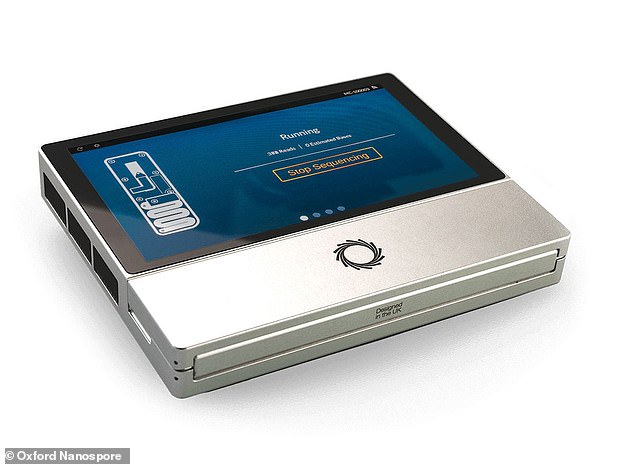 A new coronavirus mass-testing kit, which includes a portable testing device called LamPORE, (pictured) could be used by members of the public in just a matter of weeks. The device uses electronic means to analyse swab samples and can give back results in just over an hour

The company, who have validated the device internally, say that it could be used to check whether every single public service worker has the virus before they go off to work.

The LamPORE device, which also comes in a desktop version which is about the size of a printer, uses electronic means to record and analyse the samples.

Each test is given a barcode which is individually assessed before returning back with the result – without having to wait for swabs to be sent to the laboratory.

The portable version of the LamPORE device is believed to be the same size as a CD player.

Oxford Nanopore CEO Gordon Sanghera told Sky News: ‘In the next six to eight weeks, we will be able to hit one million tests a month, and we can double that and double it again.’

‘You have to be able to test in real time, or near real time, at the point of infection and close it down rapidly.

After passing the initial tests inside Oxford Nanopore, the device and the testing system is set for further checks before being shown to regulators.

Meanwhile, an antibody test is being prepared for public usage in South Wales, with Ortho Clinical Diagnostics, situated around 20 miles outside of Cardiff in Brigend, believed to be the only company currently working on this typing of test in the UK.

According to Wales’ health minister Vaughan Gething, the test will be able to determine whether someone has previously had the virus in the past. 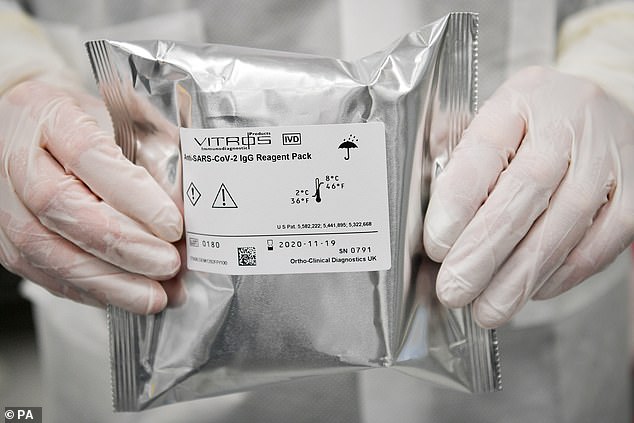 Meanwhile, Ortho Clinical Diagnostics, a company based in South Wales, are the only firm in the UK working on an antibody test (pictured) which can tell if someone has had the virus in the past

Mr Gething said: ‘It is important to say although the test can tell if someone has had the virus, it’s not certain as to how much immunity they’ll have to the virus.

‘We are also looking to deliver another type of antibody test, which can give a result in minutes.

‘Together with the test announced today, this will form an important part of our test, trace, protect to strategy to help Wales come out of lockdown.

‘I will shortly be announcing how these antibody tests will fit into the strategy and when our critical workers and general public will be able to get access to them.’