Police were called to a village pub this weekend after reports that it was flouting lockdown rules – only to discover the ‘party’ was online.

The Crown pub, in Cleator Moor, Cumbria, has been hosting Zoom get-togethers dubbed the ‘Stay Inn’ since it closed to customers when coronavirus restrictions were put in place on March 23.

Pub-goers have taken part in open mic nights, quizzes and ‘general chit chat’ from the comfort of their own homes to keep spirits high throughout the lockdown.

But on Saturday evening, the online regulars were shocked when Cumbria Police knocked on the door following reports the pub was open for business.

In a clip from the Zoom chat, landlord Russ Lemon and his parter Steph Jenkinson are seen explaining to an officer that the pub was only hosting a virtual get-together. 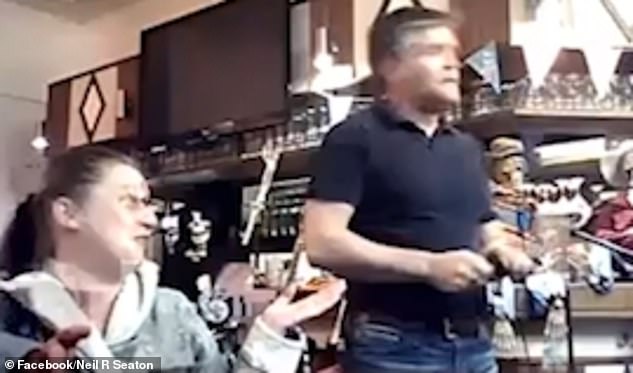 On Saturday evening, regulars enjoying an online booze-up with the landlord of the Crown pub in Cleator Moor, Cumbria, were shocked to see police arrive following reports the pub was open for business

A few moments later, an officer hops into the frame to wave at the six regulars who are enjoying a pint from the safety of their homes.

Police can then be seen searching the premises in the background of the call, as the pub-goers joke they are raiding a ‘virtual pub.’

Another drinker jokes about the ‘victims at the bar’ – referring to a backdrop of fake skeletons – before imploring the officers to ‘look in the cellar.’

The three Cumbria Police officers soon head out of the pub after it becomes clear the get together was only taking place online.

Neil Seaton, who recorded the clip, told MailOnline: ‘We were chatting the other night, laughing and joking away as we normally do, when we heard a knock on the door. 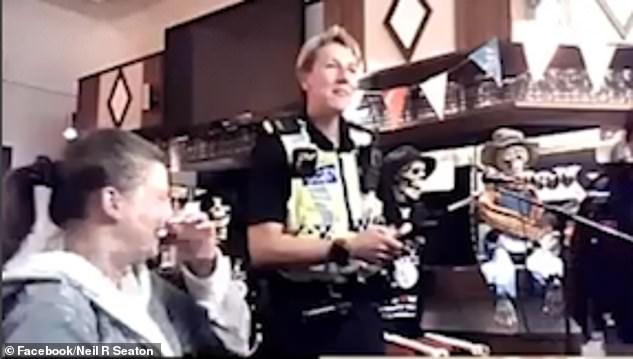 In a clip from the Zoom chat, landlord Russ Lemon and his parter Steph Jenkinson are seen explaining to an officer that the pub was only hosting a virtual get together 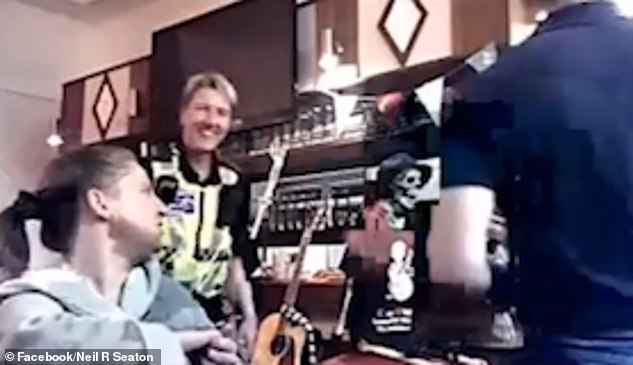 A few moments later, an officer hops into the frame to wave at the six regulars who are enjoying a pint from the safety of their homes

‘Landlord Russ gets up and at that point I click record in the meeting because I heard Russ say “I think it’s the police, I think we’re being raided.”

WHAT ARE THE CURRENT COVID-19 RULES?

Boris Johnson has moved to ease coronavirus lockdown restrictions in the UK, but pubs, restaurants and bars still remain closed.

According to the government, these ‘non-essential’ businesses will ‘reopen in a phased manner provided it is safe to do so.’

Under the new restrictions, Britons are permitted to spend time outdoors – for example sitting and enjoying the fresh air, picnicking, or sunbathing.

Residents are also allowed to meet one person from a different household outdoors so long as they remain two-metres apart.

Britons can now also exercise outdoors more than once a day, and use outdoor sports courts and facilities with members of their household.

Garden centres have also reopened to the public under the eased restrictions.

Mr Seaton explained that the landlords had their laptop plugged into speakers near the window, so ‘anybody walking past would probably think the pub is jam packed.’

‘Some of the open mic nights are populated by locals from in and around Cumbria singing and if that’s coming from the PA system its loud and someone would hear it,’ he said.

‘It would have sounded like the pub was full, so somebody out of concern, and rightly so, thought someone was breaking lockdown rules and police responded exactly as they should have.’

Cumbria Police said they received reports on Saturday that people had been singing karaoke inside the pub on Friday night, but when they checked The Crown on Saturday evening it ‘appeared closed.’

Officers then returned just before 11pm after another member of the public reported seeing people going in and out of the establishment.

‘However, this was likely our officers who were there at this time confirming that nobody at the pub other than the owners and the pub was not open,’ a spokesperson for Cumbria Police added.

‘The pub was actually running a “virtual pub” over Zoom, which appears to have been what has confused people living in the vicinity.’

Mr Seaton explained he had created a ‘virtual pub’ website for The Crown after lockdown measures forced it to close in March. 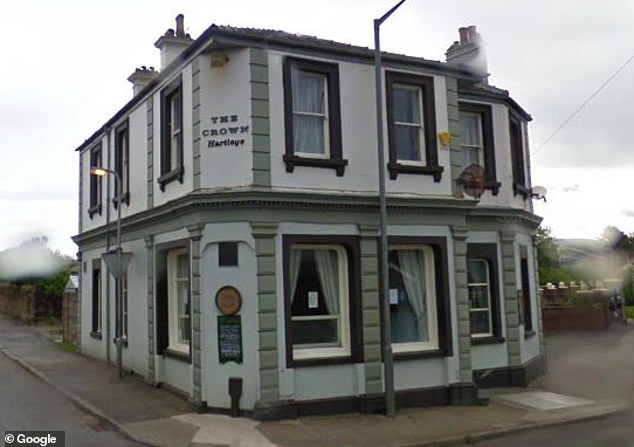 The Crown pub in Cleator Moor, Cumbria (pictured) has been closed to customers since coronavirus restrictions were put in place on March 23 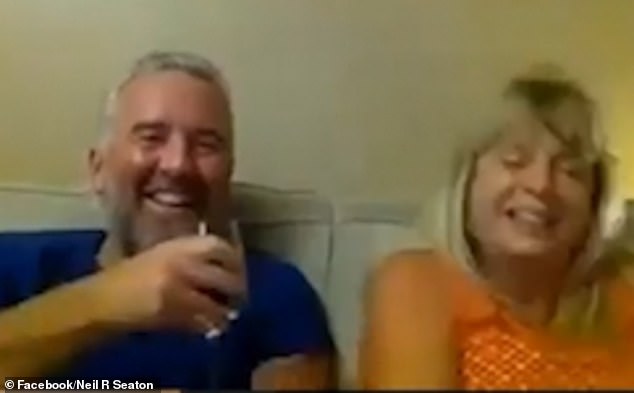 ‘I’m a local of the pub and obviously when the lockdown started I provided the pub with a website to give them the opportunity to trade and sell online and link to local businesses to help each other,’ he said.

‘For mental health, we thought we needed a virtual pub so regulars can still talk because we’re not a young place, the majority are older chaps and ladies and this provided a virtual platform.’

Pubs, restaurants and bars have remained closed amid the coronavirus crisis, with the government stating these ‘non-essential’ businesses will ‘reopen in a phased manner provided it is safe to do so.’